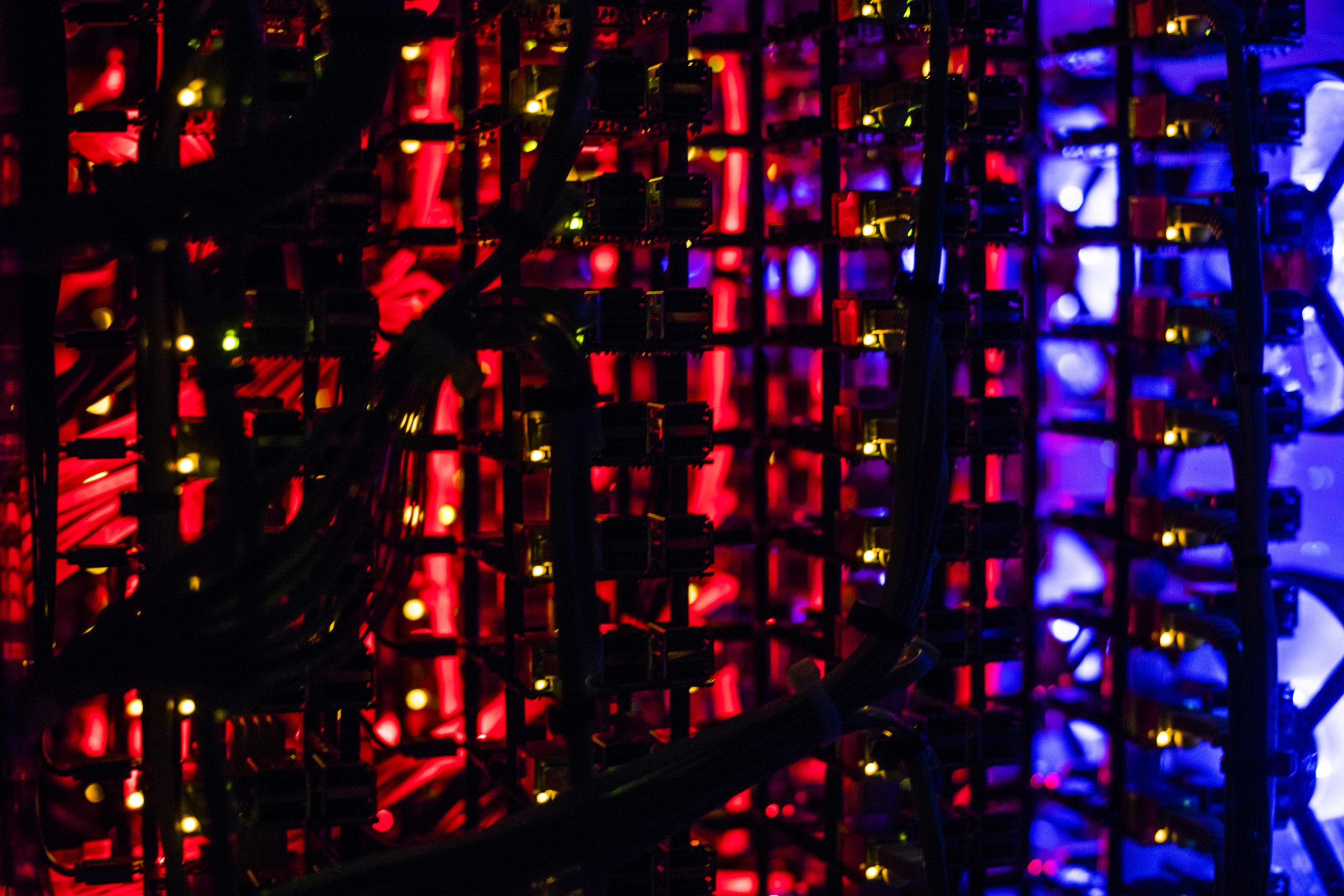 The official launch of SoC Hub took place on 27 February 2021 as a part of Tampere Smart City Week conference. The whole-day webinar included several speakers from the technology industry, academia as well as government and business development organizations. Below you can read a summary of the launch day’s presentations.

The launch began with a keynote presentation by Veijo Kontas, who is in charge of SoC development at Nokia Networks. Throughout his professional life, he has been engaged in semiconductors and SoC development. Kontas gave an overview of the drivers to SoC development which are 5G and artificial intelligence. 5G deployment is progressing fast, and using the latest silicon is crucial for success. Even if the radio access networks are going to be cloudified the role of system-on-chip and hardware is even more important. Nokia is investing heavily to SoC development in Finland Tampere being a key System-on-Chip location for Nokia.

The first keynote was followed by presentations from business development organizations and the university. Kari Leino, ecosystem lead at Business Finland, introduced the European and national microelectronics competence creation initiatives. As Veijo Kontas pointed out, the EU based companies are designing just 15% of the world’s silicon​. Kari Leino elaborated the challenges in the field and stated that for now, the EU is lacking processors, AI chips and possibilities for component manufacturing. To address that, in the end of 2020, EU signed a declaration for 2 nm node and custom processor development.

Seppo Haataja, the director of Smart Tampere Programme at Business Tampere, discussed the importance of SoC Hub in wider regional economic development. Tampere is known as a leading industrial city around Europe and the world. The city area brings together students, experts and 1300 ICT companies, and offers good opportunities for the SoC field to grow and the application companies to deploy customized system-on-chip.

Jyrki Vuorinen, the Dean of the Faculty of Information Technology and Communication Sciences at Tampere University, complemented the preceding presentation by highlighting the strength of the Tampere area, which lies in integration of expertise and collaboration in the field of microelectronics. In this the university has a vital role and developing world class technologies requires investing into education. Tampere University is the leading digital design and FPGA expert educator in Finland, and increases investment to digital and mixed-signal ASICs. From the university’s point of view, the goal is to double the number of students and create rich culture in this area through the activities of SoC Hub. 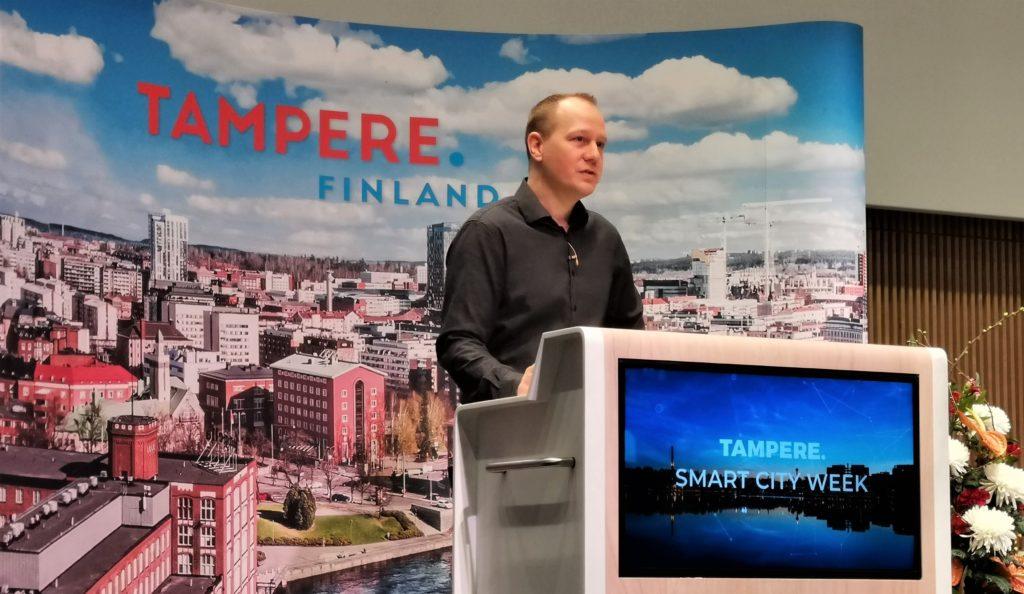 Ari Kulmala, Pofessor of Practise at Tampere University​ and Principal Engineering Manager at Nordic Semiconductor, concluded the first session of the launch with his presentation about why SoC development is something you should be interested in right now. Kulmala pointed out that it appears that it’s time to differentiate through hardware and technology leaders are investing into SoC development more than ever. In order to have the roadmap in their own hands the companies must master the hardware. All the giant technology companies have their own SoCs, and Finnish companies must be prepared to follow in order to differentiate or respond to disruptions​.

The second session of the launch started with presentations about the SoC Hub ecosystem and the chip. The ecosystem activities were introduced by Timo Hämäläinen, Professor of Computer Engineering at Tampere University. SoC Hub aims to strengthen development of world-class System-on-Chip architectures, design expertise and collaboration. This will be executed by bringing together the whole chain of stakeholders, co-creating chips and sharing the experiences and knowledge. This was followed by Ari Kulmala presenting the plans regarding the SoC Hub chip. 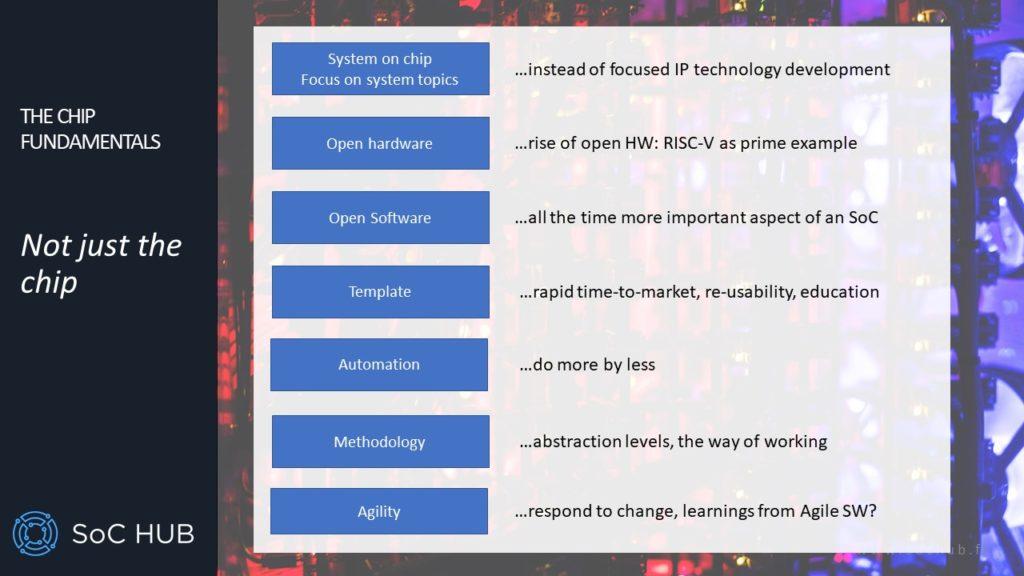 The German collaboration project Scale4Edge was introduced by the project coordinator Wolfgang Ecker who works as Distinguished Engineer at Infineon and Professor at Technical University of Munich. Scale4Edge is building a complete RISC-V based ecosystem from ground up with automated tools, a secure processor architecture realized in multiple chip versions.

Co-creation in SoC Hub happens through collaboration between Tampere University and companies. The founding partners and their role in the ecosystem was introduced in an interview with the founding companies which are CoreHW, Siru Innovations, VLSI Solution, TTTech Flexibilis, Nokia, Wapice, Procemex and Cargotec. The partner companies contribute to building the subsystems and IPs to make the system-on-chip prototypes that will be developed in SoC Hub. You can find a compilation of the companies here.  At Tampere University, there are six founding professors from different research areas working in SoC Hub. Read more about them here.

Taiwanese TSMC is the world’s leading semiconductor manufacturer. The final session of the launch began with the company’s Senior Account Manager Marco Vrouwe presenting an IC technology update. TSMC has a wide variety of technologies with latest ones, such as 3nm, being targeted to high performance computing. However, in the Internet-of-Things domain, having expected yearly growth of more than 20%, the most fit processes are different. The latest development are on 22nm ULL and 12nm N12e processes. These technologies offer an affordable and a price optimized way to innovate through silicon and are typically relatively more common in European area.

In her presentation Senni Laaksonen, Vice President of the Research and Development of Murata​ Electronics, continued the discussion on the drivers to SoC development and introduced the importance of accurate inertia measurement in future autonomous driving. Automotive industry is facing a paradigm change and global markets are forming around digitalization of traffic and that along with the rise of connectivity increases the demand for the sensing solutions. Inertial sensors are an essential part of the autonomous driving systems.

Tero Rissa, the principal specialist at Xilinx​ Inc, has more than 20 years of industrial experience from design and use of wide range of SoC from mobile to datacenters. In his presentation, Rissa discussed the challenges that come from the technology that is not scaling with the application demands. SoC FPGAs offer a solution to help adapting the applications to the architecture with rapid time to market and less initial cost compared to dedicated ASIC design.

SoC Hub – what happens next?

Timo Hämäläinen concluded the launch day with a summary of what SoC Hub will offer in the future. There will be regular events such as workshops, webinars and hands-on labs which will be open for public. The workshops will begin in March and more information will be announced later.

System-on-chip prototypes will be designed in the ecosystem. SoC Hub manufactures one chip per year. It is based on an architecture template that makes the quick prototyping and idea testing possible with reasonable effort and cost. Also, it opens the door to new business opportunities for start-ups as well as established companies.